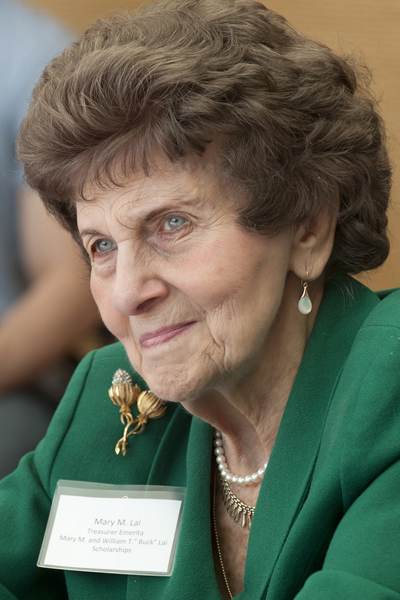 An interview with Mary M. Lai: An extraordinary life of dedication to family, faith, and Long Island University

In 2003, after 58 years of service to Long Island University, Mary Maneri Lai (B.S. ’42) stepped down from her post as chief financial officer. Eleven years later, at 93, Mrs. Lai comes to her office every day, dressed in a classy suit and accessorized with pearls and a wide smile, and continues to be a guiding voice and inspiration in the LIU community. Throughout her career, Mrs. Lai was a groundbreaking visionary for both the university and women in the workforce. She was the first female CFO of a university, having worked with 10 presidents across six decades. Without Mrs. Lai, the university most certainly would not be where it is today. It was she who signed the check that led to acquisition of LIU’s Brookville campus. She negotiated the contracts for every building on the Brooklyn, Post, and Southampton campuses, and facilities at all of the commuter campuses. Dr. David J. Steinberg, president of LIU from 1985 to 2013, called her Mater Universitatis, the mother of the university.

Q: Looking back at your life and long career, what are the most important lessons you have learned?

My faith was the most important thing to me. If you have faith, and God is alongside you, within you, every decision you make you feel comfortable, you know you can work well.

Also, feel good about your work and take pride in it. That’s what kept me here all these years. When I graduated from college I originally wanted to teach business subjects, but there were no jobs at the time. But there were openings in public accounting for women because the men were all going into service. I was hired by a mid-sized accounting firm. Then I got married, and my husband (William T. “Buck” Lai '41) was in the Naval Air Corps and I worked different jobs on the bases where he was stationed. When we came back I ran into a professor from Long Island University on the subway. The next day President Metcalfe called and asked me to help get the university’s finances in order. I told him I wasn’t interested, but I said I would do it for one year and then I would return to public accounting and become a CPA.

Well, in that one year enrollment went from 800 to 5,000, we put the deposit on the Post Estate, which became the C.W. Post campus. I worked so much my mother used to say, ‘Why do you bother coming home? Why don’t you take a cot and sleep there?’ So when the year was up, I had put so much of myself into it that I couldn’t give it up. And in the meantime, the president offered my husband a job here, as a way of keeping me [laughs]. And so the dye was set, we were both at the university and we both began to love it.

Q: You shattered the glass ceiling long before “leaning in” was part of the dialog about women getting ahead in the workforce. How did you balance work with your family?

The idea of a woman working after she had children was unheard of. I always used to say ‘My husband allowed me to work.’ You have to remember men felt very intimidated if women worked. But my husband didn’t feel that way. He was an athlete, a real man. He thought it was great that I worked. I thought I would quit when my son was born. But I had created every piece of paper, every system, not just for budget but also the registrar and admissions; Finance was like the heart of the university, everything had to come through us. I worked up until the night before I had my first child. I had no plan of what I was going to do, but I had faith. I prayed, ‘If it’s wrong for me to work, put obstacles in my path; if it’s right, remove them.’

A few weeks later my mother called and said she knew a woman from the store [the Maneri family owned a grocery in Greenpoint, Brooklyn] who would be a perfect babysitter. So she came to our house every day. I still thought when the baby got a little older I would quit. But it worked out so well I didn’t have to. I had no obstacles. I knew it was unusual, but I was doing what I loved to do. And I was still able to do a lot of things for the boys that many women who stay home didn’t do.

So, I don’t think I shattered the glass ceiling, it just happened. I was lucky to have help. I was using a third of my salary to pay for it, but I didn’t care. I just wanted to do what I love to do.