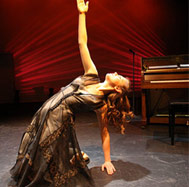 You have a new choice when it comes to earning your M.F.A. in Theatre! Traditional graduate programs require two or three years of classroom study, with a focus on training to compete with fellow students. At LIU Post, you focus on collaboration and ensemble, creating a group thesis production with a company that you’ve helped to form. You’ll perform your 1st Year Show and your thesis in a New York City theatre venue, earning your first professional credits! You’ll learn all the skills you need to develop as an actor, designer, director, producer, or playwright, preparing you to not only obtain work after graduation, but to create work as well. A focus on physical theatre training, using Suzuki, Viewpoints and other contemporary techniques, with cutting-edge productions opportunities, makes LIU Post ‘s M.F.A. in Theatre the alternative program of choice!

AUDITION INFORMATION:
An audition and interview are required for admission to the program. Auditions for the MFA in Acting are conducted at the University Resident Theatre Association (U/RTA) Satellite auditions, and at the Southeastern Theatre Conference (SETC) graduate auditions. Students who are unable to attend these auditions may submit a video audition via the Acceptd website: www.getacceptd/liu. For specific dates and locations, and other audition information, please visit the link below."
www.liu.edu/post/audition