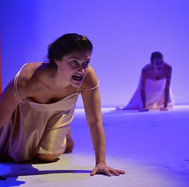 You have a new choice when it comes to earning your M.F.A. in Theatre! Traditional graduate programs require two or three years of classroom study, with a focus on training to compete with fellow students. At LIU Post, you focus on collaboration and ensemble, creating a group thesis production with a company that you’ve helped to form. You’ll direct your 1st Year Show and your thesis at a theatre in New York City, earning your first professional credits! You’ll learn all the skills you need to develop as a director, preparing you to not only obtain work after graduation, but to create work as well. A focus on physical theatre training, using Suzuki, Viewpoints and other contemporary techniques, with cutting-edge productions opportunities, makes LIU Post ‘s M.F.A. in Theatre the alternative program of choice!

AUDITION INFORMATION :
To apply for the M.F.A. in Directing, applicants must complete three steps: