The Brooklyn College of Pharmacy was established in 1886 by the Kings County Pharmaceutical Society three years after the opening of “the great bridge”. Initially the College offered a “partial course of lectures” to the drug clerks of the city. Following a fund-raising campaign begun in 1889 to establish the College as a recognized institution to grant pharmacy degrees, the first formal course of study began on October 1, 1891. 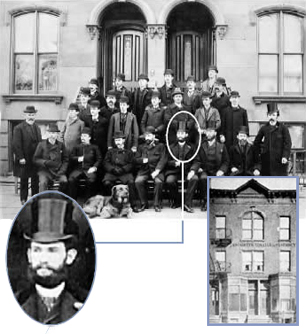 1892
In 1892 the College graduated its first class. Students in this era attended lectures in a two-room apartment on the second floor of a Victorian building located at 399 Classon Avenue. The kitchen of the apartment served as a laboratory and the parlor was the lecture hall. Among the members of the first class was William D. Anderson, Ph.G. who became the third dean of the College. 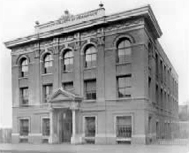 In 1903 the College moved to its first specially built home at 265-271 Nostrand Avenue. The three-story brick and stone building had been constructed by the Society to be “thoroughly equipped for the best work in pharmaceutical education.” The College had moved to Nostrand Avenue from 329 Franklin. The move to the two-floor facility in the Franklin Avenue building took place in 1895 after enrollments surpassed the capacity of the Classon Avenue building.

In 1929 the College affiliated with the recently established Long Island University but still retained its own Board of Trustees and independence. In the same year the College moved to its fourth home at 600 Lafayette Avenue. The five-story modified collegiate Gothic laboratory and classroom building included a top-floor gymnasium. The gymnasium was home to the College’s basketball team that was a member of the Intercollegiate Pharmacy League that included schools/colleges such as Fordham, Columbia, Philadelphia, Rutgers, and Temple. 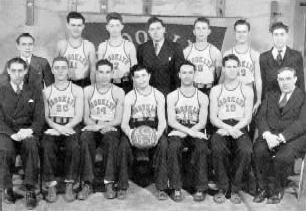 During the war emergency period of the early 1940’s, the College offered an accelerated course in addition to the traditional four-year program that had been instituted in 1932. The accelerated three-year program enabled those who were enlisted to fill the urgent need for pharmacists and other health care professionals in the armed services.

In 1959 the College pioneered in the field of pharmacy with a Radioisotope Laboratory, the first in New York State. The Laboratory was made possible through alumni contributions and a grant from the Atomic Energy Commission. A new graduate program leading to the M.S. with a specialization in Pharmacy Administration, the first of its kind in the state, was also instituted in 1959. Beginning in the fall of 1960 the five-year B.S. in pharmacy program was instituted, and in 1962 a hospital pharmacy administration internship program was introduced. Numerous other M.S. degree programs were introduced during the 1960’s and early 1970’s. 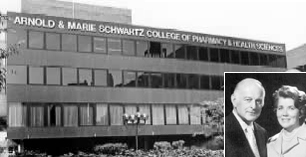 In 1976 construction was completed on a new complex for the College on the Brooklyn Campus of Long Island University, a quarter mile from the building at 600 Lafayette. The new home for the College was made possible by the philanthropy of Arnold Schwartz and his wife, Marie Smith Schwartz. The Brooklyn College of Pharmacy became the Arnold & Marie Schwartz College of Pharmacy and Health Sciences. At the same time the College became a fully integrated unit of the University.

In 1994 construction began on the $26 million Zeckendorf Health Sciences Center. With its completion in 1995, the College’s students had access to classrooms capable of multimedia lectures and distance learning. The International Drug Information Center moved into new state-of-the-art facilities which included a twelve-station computer laboratory. In addition, new specialized laboratories were available for faculty research and to educated students in the Ph.D. program in Pharmaceutics that had begun in 1993. In September of 1994 the College accepted its first students into the post-baccalaureate Pharm.D. program.

The next chapter of the College’s history is being written. In May 2002, the students in the College’s first entry-level Pharm.D. class (who began their professional studies in 1998) received their Doctor of Pharmacy degrees. Work has been completed on a new 29-station information technology computer laboratory and a new physical assessment laboratory. Construction is expected to begin soon on a pharmaceutical care laboratory that is being designed to provide a simulated pharmacy practices experience for students. As the College moves forward, we collectively look back with pride at our distinguished heritage and we eagerly continue to dedicate ourselves to excellence in the education of tomorrow’s pharmacists.