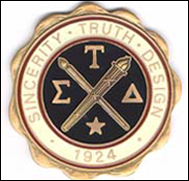 A member of the Association of College Honor Societies, Sigma Tau Delta is composed of over 560 chapters throughout the United States, Europe, Canada, and the Caribbean. Sigma Tau Delta's central purpose is to confer distinction upon outstanding students of the English language and literature in undergraduate, graduate, and professional studies. Sigma Tau Delta also recognizes the accomplishments of professional writers who have contributed to the fields of language and literature.

Membership in Sigma Tau Delta is by invitation, extended through a local chapter on behalf of the international organization. Students who meet the qualifications for membership must apply through the chapter on their campus. Once a student contacts the local chapter, the sponsor will check the qualifications and recommend that student for membership.

Membership in Sigma Tau Delta is an outward recognition of personal accomplishment. It provides opportunities for those interested in English language and literature to join with like-minded persons on the local, regional, national, and international levels and to participate in and present professional work at conferences and conventions at these levels. Members receive the Newsletter while they remain active in their local chapters. They also receive and have the opportunity to contribute to the award-winning literary publication, The Rectangle, and are eligible to compete for several $1,000-$2,500 scholarships and awards. There are also internship and graduate assistantship opportunities available for members.

In 1957, the Omicron Zeta Chapter of Sigma Tau Delta was organized at the Brooklyn Campus of Long Island University. The purpose of the chapter is to encourage advanced study in English literature and to honor outstanding students in the field by election to membership.

Candidates for undergraduate membership must have completed a minimum of two upper division courses (meaning 100 level or above) in literature, rhetoric studies, or creative writing. Students in the Honors Program who have taken an upper division elective with an English faculty member may count that course as part of their two courses. The candidate must have a minimum of a 3.0 overall GPA and have earned nothing lower than a “B” in all upper division English courses. Eligible candidates may not have any outstanding incomplete courses (“I” grade) on their transcripts.

Candidates for graduate membership must be enrolled in a graduate program in English, or one of its specializations, have completed six credits of graduate work or the equivalent, and have a minimum grade point average of 3.3 on a 4.0 scale. To be eligible, graduate students must also clear any incomplete (“I” grade) courses on their transcripts.

Watch the English Department blog (The Longest Island) for announcements of upcoming chapter events, including the next member induction ceremony.

Phi Alpha Theta is composed of chapters in properly accredited colleges and universities. All students in these institutions who have completed the required number of history courses and are maintaining high standards in their college or university studies are eligible for membership (see below). Phi Alpha Theta is a professional society whose purpose is to promote the study of history through the encouragement of research, good teaching, publication, and the exchange of learning and ideas among historians. It seeks to bring students, teachers, and writers of history together both intellectually and socially; and it encourages and assists historical research and publication by its members in a variety of ways.

The Epsilon Omega Chapter of Phi Alpha Theta at LIU Brooklyn is open to both undergraduate and graduate students who meet the following criteria:

Those who are already members of Phi Alpha Theta are warmly welcomed to participate in Epsilon Omega Chapter activities. Membership in Phi Alpha Theta is for life, so you need not join a second time. Applications for membership are solicited near the beginning of fall and spring semesters. Announcements will also be made in various history classes by the instructors.

Political Science Club
The Club sponsors events on campus, including film presentations, lectures and discussions. It also has partnered with outside organizations like Kiva, a micro lending project that enables you to lend to specific entrepreneurs in the developing world, empowering them to lift themselves out of poverty; The Vine Group, which promotes education and peace in Africa; and Sew Much Comfort, a non-profit organization that makes special clothes for injured soldiers returning from Iraq and Afghanistan. The Club also travels to New Orleans every Spring break to help reconstruct the housing stock.

Model UN
LIU Brooklyn's award-winning Model UN Club provides a forum for students who are interested in international organizations and law, diplomacy and conflict resolution in the international arena. Each semester the Model UN Club fields one or two delegations, representing different countries, to compete at model United Nations conferences that simulate the activities of the UN General Assembly.

Typically there are three conferences in an academic year: two domestic (the first is in Washington, D.C., and the second is right here in New York City) and one international (recent venues have included Beijing, China; Quito, Ecuador; and Prague, the Czech Republic). Students work in a team environment to familiarize themselves with the history, culture and domestic and international policy imperatives of the country they are representing and then advocate for the interests of that country in a competitive environment among their peers from around the world.

LIU Brooklyn has a record of consistent achievement at the conferences it attends. The team expects to come home with official recognition and continues to do so, securing multiple awards for its delegations in all aspects of competition.

The Model UN Club offers students a unique opportunity to broaden their horizons through study, travel, competition, engagement and team-building. Participating students are presented with a once-in-a-lifetime opportunity to enjoy a resumé-building life experience while making contacts around the world and friendships that endure.