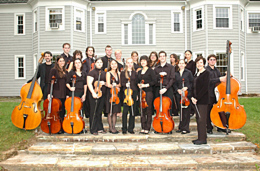 This group studies and performs the standard repertoire for string ensemble from the concerto grosso form to the serenades and string symphonies of the Romantic and 20th Century periods. Works are rehearsed and performed with an emphasis on learning ensemble skills as they relate to string techniques.

String Ensemble, which was created in 2002 by Professor Maureen Hynes, has performed works of Corelli, Vivaldi, Britten, Sammartini, Greig, and others. String Ensemble has appeared on the Hillwood Museum Series and the Hilltop Chamber Series of the LIU Post Orchestra.