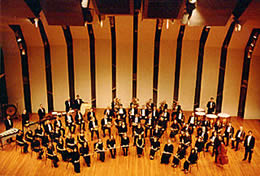 The Wind Symphony is a full-sized modern wind band of about eighty performers, this ensemble is composed of both graduate and undergraduate musicians. Repertoire is drawn from a variety of styles and musical periods, carefully chosen in order to stimulate a high degree of musical growth for each member. Newly commissioned works are often performed alongside original and transcribed music for band. While a high level of performance is demanded of every player, enrollment is open to all accomplished musicians (music and non-music majors) depending upon space. Entrance and seating auditions take place at the beginning of each semester.