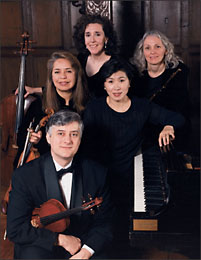 Formed in 1981, the Pierrot Consort was originally modeled after the instrumentation of Schoenberg's Pierrot Lunaire and has always been dedicated to performing new music as well as the standard repertoire. In 2006, the Pierrot Consort celebrated its 25th season as faculty at the C.W. Post Chamber Music Festival which was founded by flutist Susan Deaver and cellist Maureen Hynes. In addition to its regular concert series at Long Island University, the Pierrot Consort has performed at Merkin Concert Hall, Weill Recital Hall, the Kennedy Center, the Bartok Society at Saranac Lake, the Bruce Museum in Greenwich, Connecticut, the Stockbridge Chamber Concerts in Great Barrington, Massachusetts and for the Islip Arts Council. In November 2000 the ensemble was sponsored by Tilles Center to perform the original ballet version of Aaron Copland's Appalachian Spring on a series of concerts focusing on the music of Copland. In June 2002, the Pierrot Consort presented a concert entitled "Making Connections: Influences of the Sea in Song, Chamber and Orchestral Music" for Long Island music and art administrators and educators at a BOCES conference. In addition, the Pierrot Consort has collaborated with Tilles Center’s Institute for Arts & Culture performing for the Summer Seminar for teachers. The artist members of the ensemble are actively involved in the musical life of New York City and have a commitment to the educational life of Long Island. The members of the Pierrot Consort are Susan Deaver, flute; Dale Stuckenbruck, violin; Veronica Salas, viola; Maureen Hynes, cello and Heawon Kim, piano.

Susan Deaver, flute
Susan Deaver is the director and co-founder of the LIU Post Chamber Music Festival, flutist of the Pierrot Consort and currently the Director of the Flute Ensemble at C. W. Post. She has performed throughout the United States, Europe and Korea in recital, as a flute soloist with symphony orchestras and in chamber music performances. She was the principal flutist of the Washington Chamber Symphony at the Kennedy Center from 1981 to 2002 and has appeared with numerous orchestras, including the Long Island Philharmonic, the Brooklyn Philharmonic, the Queens Symphony Orchestra, Philharmonia Virtuosi and on Broadway in the "Phantom of the Opera". She has received fellowships from the Bach Aria and the Tanglewood Festivals and has recorded for New World records, CRI and Arabesque Recordings. Active as a conductor, Ms. Deaver is the conductor and music director of the North Shore Symphony Orchestra, and was appointed in 2001 as the conductor of the University Orchestra at SUNY Stony Brook. Ms. Deaver has guest conducted in Scotland, England, Spain and Korea and is experienced in working with young musicians and music educators as both conductor and clinician. She is the Principal Guest Conductor of the Long Island Youth Orchestra and was a conductor for Manhattan School of Music’s Contemporary Ensemble from 1987 to 1989. For the past eight years, she has assisted Tilles Center in coordinating the New York Philharmonic’s educational residency with the C.W. Post Orchestra. Her Bachelor’s and Master’s degrees are from Manhattan School of Music where she received her Doctorate in Musical Arts.

Maureen Hynes, cello
Maureen Hynes, co-founder of the LIU Post Chamber Music Festival enjoys an active career as soloist, chamber musician, orchestral player and teacher in the New York musical world. She performs regularly with the American Ballet Theater, the American Symphony Orchestra, the Opera Orchestra of New York, American Composers Orchestra, New York Virtuosi, the Westchester Philharmonic and the Long Island Philharmonic. She has also appeared with the Royal Ballet, the San Francisco Ballet, at the Spoleto and Aspen Festivals and at the Lake George Opera Festival. Her work in New York also includes substitute work on Broadway in Les Miserables and The Lion King. Ms. Hynes was a winner of the Concert Artist Guild Award with the Janus Ensemble and she is currently a member of the Pierrot Consort. She has performed in Europe, Canada, Korea and Hong Kong both as cellist and gambist. In addition to being Professor of Cello and Director of String Studies at Long Island University/C.W. Post, Ms. Hynes is director of Orchestral Studies, director of the C.W. Post Orchestra, String Ensemble and Merriweather Consort, and has been director of the C.W. Post Pre-College Music Program. In January of 2003, she was invited to conduct Division III of the Nassau All-County Festival at Tilles Center. She is a graduate of Manhattan School of Music, where she received her B. M. and M. M. degrees. Her teachers have included Ardyth Alton, Harvey Shapiro, Laszlo Varga and Daniel Morganstern.

Heawon Kim, piano
Heawon Kim’s auspicious studies began in her native Korea appearing at the age of seven with the Korean Broadcasting Symphony Orchestra and the Seoul Philharmonic. Subsequently she won numerous competitions, appearing with these orchestras frequently on television and radio. Upon coming to this country in 1972 to the North Carolina School of the Performing Arts, under the guidance of Clifton Mathews, she won the Vittorio Giannini Award, the Southeastern Music Teachers Competition, and appeared with the Orchestra of the North Carolina School of the Performing Arts under Nicholas Harsanyi. Following rave reviews she was brought to New York by Claude Frank, with whom she studied at the Mannes School of Music, and subsequently earned her Master of Music under Robert Goldsand at the Manhattan School of Music. She has frequently performed for the classes for Josef Gingold, Janos Starker, Franco Gulli, and Andre Watts. Ms. Kim has performed as soloist with regional orchestras in the United States, in chamber music with such groups as the Bronx Arts Ensemble, Pierrot Consort, Rosewood Chamber Ensemble, Garrett Lakes Festival, Leonia Chamber Players, and the Colonial Symphony. She has appeared with the KBS at the opening of the Sejong Arts Center. She is much in demand as a partner in recitals with such artists as Erick Friedman, Sanford Allen, and her husband, Dale Stuckenbruck. She is on the faculty of the C.W. Post/Long Island University in an innovative new program for instrumentalists. She is very active in the Korean musical community of New York as pianist for major recitals.

Veronica Salas, viola
Violist Veronica Salas, a native of Chile, earned her BMA, MMA and DMA from the Juilliard School as a student of Lillian Fuchs. She has performed as soloist with the Aspen Festival Orchestra, Pro Arte Chamber Orchestra of New York, University of Southern California Symphony, and last season, with Colonial Symphony, of which she is principal violist. In February 2002 she performed the Vivaldi Concerto for Viola and Guitar in Merkin Concert Hall. An active chamber musician, Ms. Salas is a member of The Lyrica Chamber Players, The Elysium Ensemble, the Pierrot Consort, The Modern Works String Quartet, The Bronx Art Ensemble and The Queens Chamber Band in which she also plays concertos on the viola d'amore. She has recorded with the New Music Consort and American Composers Orchestra on the Musical Heritage and Vanguard labels; in addition, she can be heard on two 1999 from Elysium Recordings, including Mozart: The Elysium String Quartet and Friends and Foss Plays Back. Ms. Salas is the principal violist of Opera Orchestra of New York and Manhattan Philharmonic, and is on the faculties of Long Island University and the Bennington Chamber Music Conference.

Dale Stuckenbruck, violin
Dale Stuckenbruck, assistant director of the LIU Post Chamber Music Festival, enjoys a diverse interesting musical life in New York as a soloist, concertmaster, chamber musician, and teacher. He credits his long-time mentor, the violinist, Erick Friedman, for his studies first at The North Carolina School of the Performing Arts until receiving his D.M.A. from the Manhattan School of Music in 1984. He has performed as soloist with the Brooklyn Philharmonic, Philharmonia Virtuosi, New York Virtuosi, New York String Ensemble, Tschaikovsky Chamber Orchestra, Taipei City Symphony Orchestra, and regional orchestras in the U.S. He can be heard as concertmaster of many of New York’s premier musical organizations such as the Brooklyn Philharmonic, Philharmonia Virtuosi, New York Virtuosi, Dance Theater of Harlem, Queens Symphony, Masterworks, Music St. Ignatius, and the Long Island Philharmonic, and "La Boheme" at the Broadway Theater. He has recorded for CRI the violin concerto by Lou Pelosi, and is included in recordings for Musical Heritage, SONY, BMG, Vanguard, Warner, Disney, Kultur Video, and in more than fifty films. His interests include the violin in earlier historical settings and the musical saw. He has been featured in "Strings Magazine", "Korean Monthly Music Magazine", and "Newsday". He served as a reviewer for "Notes" of new 20th century violin music. He is joined often by his wife, Heawon Kim in recitals.