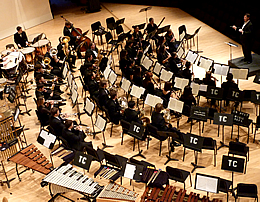 The Wind Ensemble consists of the most outstanding wind and percussion players at the university. Dedicated to presenting the finest repertoire from all musical periods to its audiences, it draws from contemporary and historical wind works, orchestral transcriptions, as well as standard band literature. The size and instrumentation of the Wind Ensemble is dictated by the demands of the music being performed. Members of this ensemble are chosen from those participating in the Wind Symphony.