Step Back in Time on our Historic Gold Coast Campus 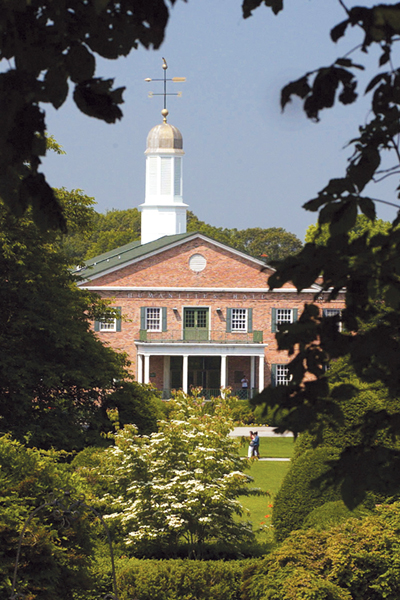 From the 1890s until the end of the Great Depression, a 15-mile stretch of Long Island’s North Shore, from Great Neck to Huntington, was the summertime playground of New York’s rich and famous. So many wealthy industrialists and business magnates of that storied time built country estates along the expanse of lush rolling hills and boulder-strewn shore that it became known as the Gold Coast, a nickname that remains in use to this day.

During the time she lived here, Ms. Post transformed the property—then known as Hillwood Estate—into an elegant Old English country estate, featuring formal gardens, horse stables, a working farm, and vibrant manicured lawns. She hosted opulent parties for her high-society contemporaries, including heads of state, world ambassadors and royalty, and Hollywood starlets. To manage the estate and the demands of her intense social schedule during the approximately four months out of each year when she was here, Ms. Post employed a staff of 100. When LIU acquired the property from Ms. Post, in 1951, she was one of the last of the original residents who gave the area its colorful name.

In the early years of the 20th century, around 500 elaborate mansions were built. The names of the industrialists and bankers who, benefiting from America’s second industrial revolution, sought to outdo each other with the size and ostentation of their castles are a veritable “who’s who” of the “Gilded Age.” All over the region, Astors, Guggenheims, Morgans, Vanderbilts, and other capitalists with seemingly inexhaustible resources erected homes in practically every great architectural style imaginable, often raiding the great homes of antiquity in Europe to acquire ornate decorative and structural components that soon were installed in Long Island palaces.

The great estates of the Gold Coast were replete with such appointments as formal gardens, greenhouses, gate houses, pools, stables, tennis courts and much more. Seldom was any expense spared to achieve the goal of creating homes that blatantly bespoke their owners’ affluence.

Though the mansions were built to last forever, many were as fleeting as the prosperity of the era, and lasted only a few years or decades. By the end of the Great Depression hundreds had succumbed to fires, bad business decisions, abandonment to avoid mounting maintenance costs and depletion of once unimaginable fortunes. Even where great homes have vanished, ruins often remain, fragments of the glorious past.

Within just a few miles of the LIU Post campus, students can visit and tour some of the grand estates and see the work of such prominent period architects, decorators, artists, and landscape designers, such as John Russell Pope, Stanford White, Carrère and Hastings, and Guy Russell. In doing so, they also have exceptional opportunities to get a taste of the Gatsby-esque opulence of the Gold Coast lifestyle at the dawn of the 20th century.