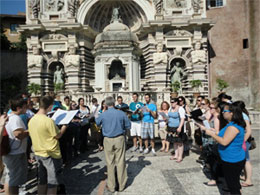 The LIU Post Chamber Singers, currently directed by Associate Professor of Music Dr. Mark Shapiro, have presented concerts throughout Europe, North Africa, Mexico, Canada, and the United States. The ensemble is also honored to perform frequently on the LIU Post Campus at fundraising and commemorative events. In 2012, the Chamber Singers participated in a performance of Video Games Live at the Tilles Center. Since 1971, the LIU Post Chamber Singers have made multiple concert tours of Europe, singing from Galway to Prague, Berlin to Rome, and Amsterdam to Madrid and Rabat. The Chamber Singers have had the distinction of being invited to perform for the New York State School Music Association (NYSSMA), the New York State Choral Guild, the Music Educators National Conference (MENC), and at both regional and national conventions of the American Choral Directors Assocation (ACDA). They have twice made broadcasts on Radio Vatican in Rome and appeared before an estimated audience of 22 million viewers on “Hoy Mexico” (Mexico’s “Today” show) in Mexico City, and have received critical acclaim for concerts in Carnegie Hall, Weill Hall, Alice Tully Hall and the Kennedy Center. Recent tours include Ireland in 2014, Italy in 2011, Wales and England in 2004, Canada in 2002, and Korea in 1998.