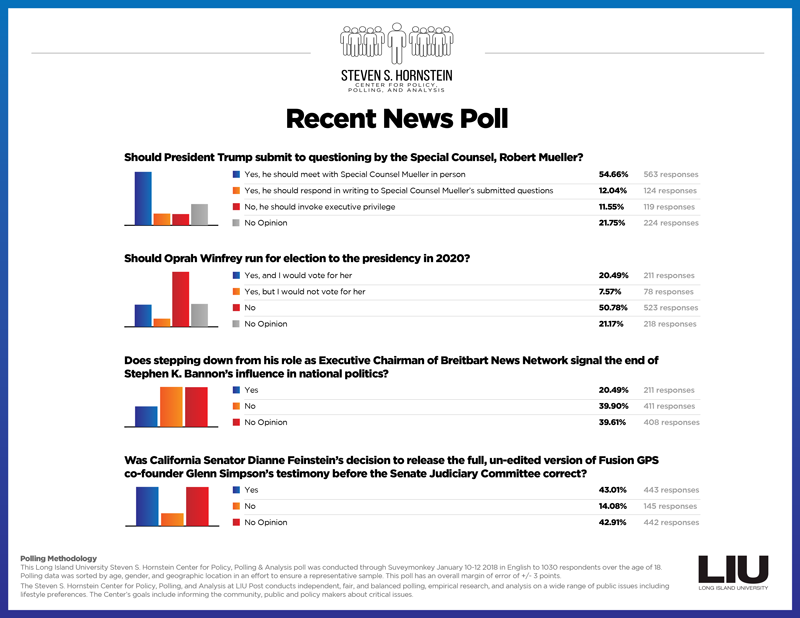 Brookville, NY (January 12, 2018) – A new Long Island University Hornstein Center for Policy, Polling and Analysis poll of hot news items found that most Americans disapprove of a Presidential run by Oprah Winfrey. LIU polled a number of Americans about trending news items to ascertain how they felt about current political developments.

“Americans continue to be invested in current political news developments, but sometimes the pundits get ahead of the American people,” said Dr. Edward Summers, Fellow at the Hornstein Center. “While many pundits are enthusiastically speculating about a possible Presidential run by Oprah Winfrey after her powerful speech at the Golden Globe Awards, the majority of Americans have a long way to go to embrace such a run.”

A vast majority of Americans polled believe that President Trump should submit to questioning by Special Counsel Robert Mueller. Fifty-five percent believe that President Trump should meet with Mueller in person, while an almost equal number of Americans (12 percent each) stated that the President should either respond in writing to Mueller’s submitted questions or invoke his executive privilege.

Despite the prominent discussion about former White House Chief Strategist Steve Bannon’s future, 40 percent of Americans had no opinion whether his departure from Breitbart News would end his influence in national politics.  Of the remainder, 40 percent of Americans believe they have not seen the last of Bannon’s influence in national politics, while 20 percent believe they have.

A plurality (43 percent) of Americans polled believed that Senator Dianne Feinstein (D-CA) was justified in releasing the full, un-edited version of Fusion GPS co-founder Glenn Simpson’s testimony before the Senate Judiciary Committee, while only 14 percent stated they did not support her decision.