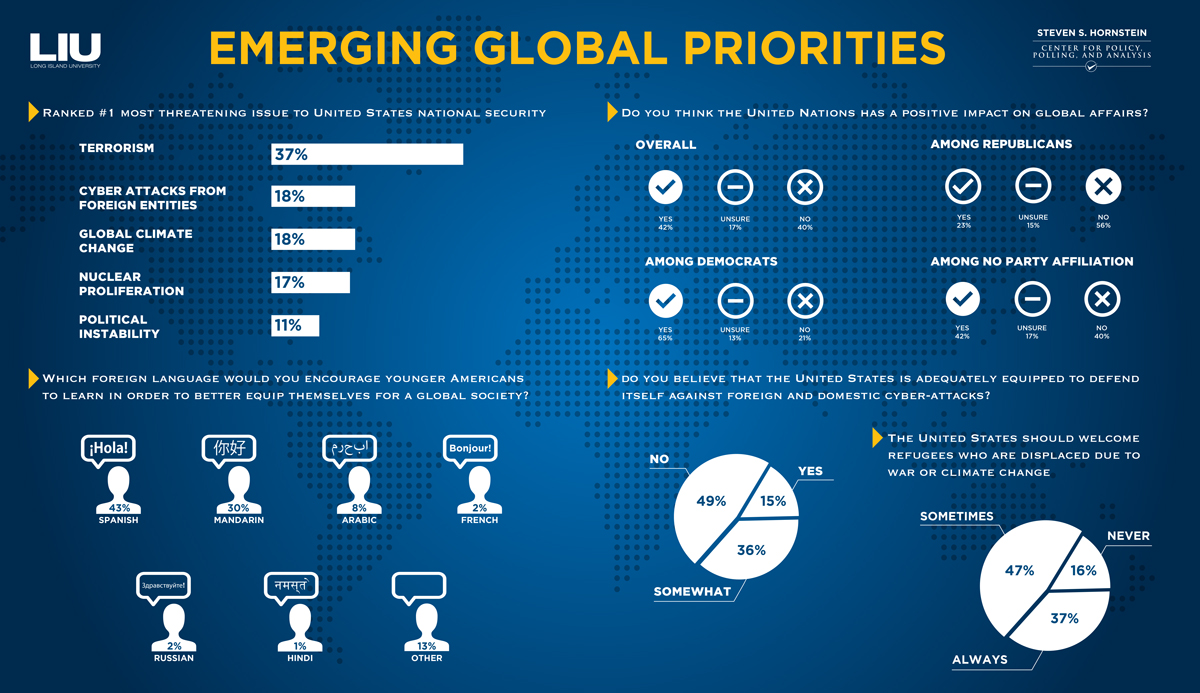 Brookville, NY (March 8, 2017) – Long Island University’s Hornstein Center for Policy, Polling and Analysis released a new poll with information about the emerging global priorities of American voters.  While the poll showed narrow support for the United Nations and policies that would allow refugees into the United States, there were very sharp partisan divides on both of those questions.  This divide extends into basic questions of national security where Republicans and non-affiliated voters overwhelmingly chose terrorism as the top threat to America’s national security while Democrats chose global climate change.

“When it comes to how Americans view our place in the world and global priorities, we now see many of the same partisan divisions that were once reserved solely for domestic policy,” said LIU Political Science Professor Stanley B. Klein, Director of the Hornstein Center.  “This will create new challenges for policy makers.”

The poll did find one major area of agreement.  Regardless of partisan affiliation, Americans overwhelmingly agree that our nation’s cyber security is inadequate.  When asked if the United States is adequately equipped to defend itself against foreign and domestic cyber-attacks, just 15% of Americans said “yes,” while 49% said “no” and 36% said “somewhat.”   The 12% of Democrats who believe our cyber defenses are adequate nearly mirrored the 15% of unaffiliated voters and 16% of Republicans who share that belief.

“Americans come together in their belief that our current cyber security is inadequate,” Dr. Klein said.  “The American people overwhelmingly agree that we must do more in this critical area.”

The poll presented a battery of questions covering topics such as global threats, cyber security, immigration and the United Nations. In total 496 Americans 18-80 were surveyed by the poll, which was conducted entirely via SMS text messages and was in the field from February 22nd-28th, 2017.

Respondents were asked to rank threats to national security on a 1-5 scale of most threatening to least threatening.  The options were: Cyber Attacks from Foreign Entities, Global Climate Change, Nuclear Proliferation, Political Instability and Terrorism.  Among those, Terrorism (37% overall), was voted as the most threatening issue- and this trend held true among all demographic groups including age, gender and political affiliation with the lone exception of Democrats, 27% of whom identified Global Climate Change as their top concern.

On the topic of whether “The United States should welcome refugees who are displaced due to war or climate change,” the breakdown was 37% “Always”, 47% “Sometimes” and 16% “Never.”  There was a strong partisan divide on this issue. While 59% of Democrats believe the United States should “always” welcome refugees, just 12% of Republicans felt that way.

Finally, respondents were asked “Which foreign language would you encourage younger Americans to learn in order to better equip themselves for a global society?” and were given the choices of Arabic, Chinese, French, Hindi, Russian, Spanish or Other. Overwhelmingly, Spanish (43%) and Mandarin (30%) were the most popular choices.

The Steven S. Hornstein Center for Policy, Polling, and Analysis at LIU Post conducts independent, fair and balanced polling, empirical research, and analysis on a wide range of public issues including lifestyle preferences. The Center’s goals include informing the community, public and policy makers about critical issues. Future topics will include but are not limited to foreign policy, education, healthcare and the environment.

This Long Island University Steven S. Hornstein Center for Policy, Polling & Analysis poll was conducted February 22nd to February 28th, 2017 entirely by SMS text messages conducted in English to 496 registered voters aged 18-80. Polling data was sorted by age, political affiliation, gender & geographic location in efforts to ensure a nationwide representative sample. This poll has an overall margin of error of +/- 4.4 points. The Steven S. Hornstein Center for Policy, Polling & Analysis is an independent and fully nonpartisan institute directed by Dr. Stanley B. Klein which endeavors to conduct research on a variety of issues affecting the American electorate. Dr. Klein has taught political science for over 50 years at LIU-Post bringing extensive experience in politics, government, and academia to the work done here at the Steven S. Hornstein Center.  For more information, contact jeffrey.guillot@liu.edu.