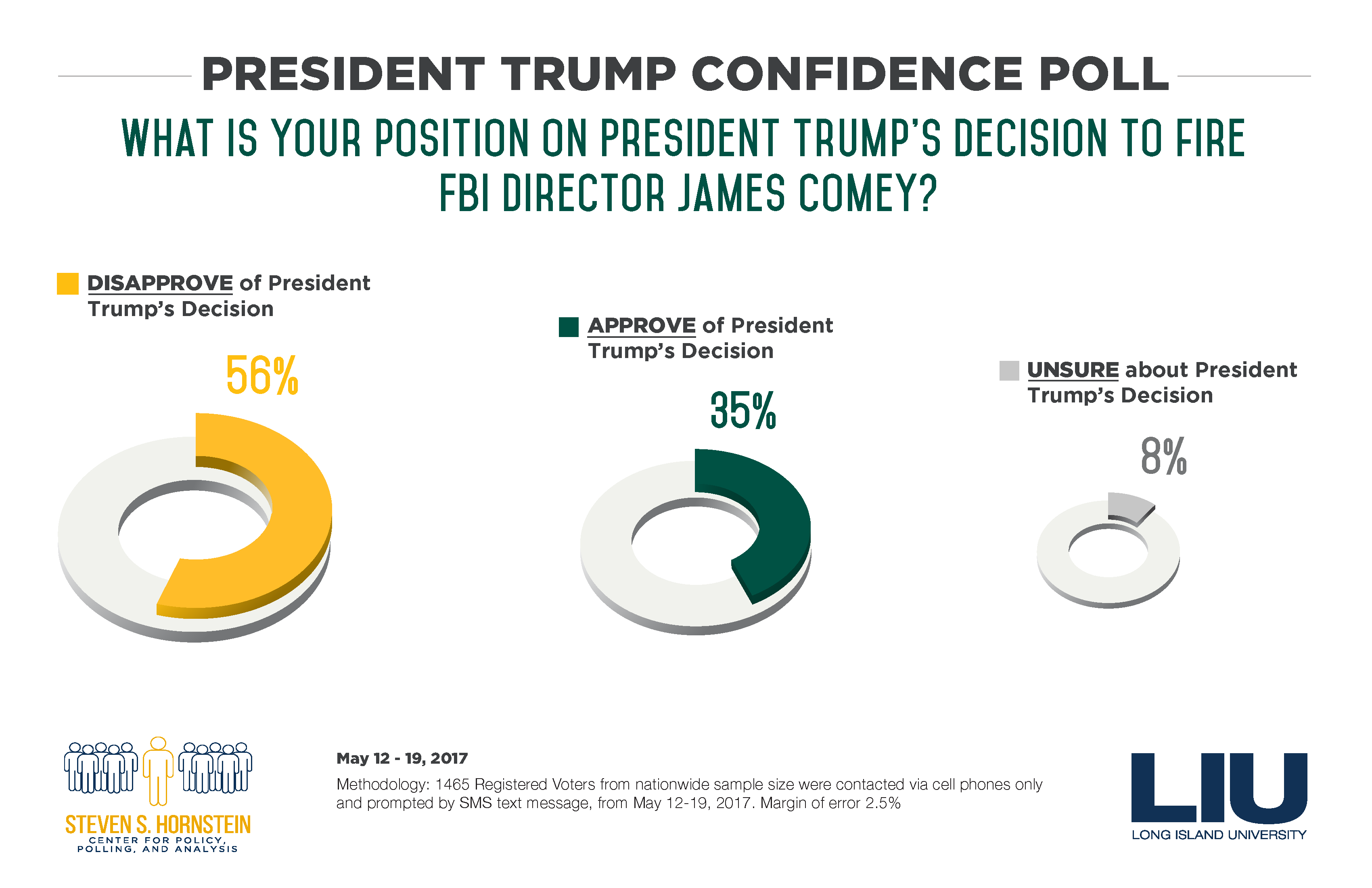 Brookville, NY (May 19, 2017) – Long Island University’s Hornstein Center for Policy, Polling and Analysis found that 56 % percent of Americans disapprove of President Donald J. Trump's decision to fire FBI Director James Comey.  The findings are based on the Center’s first published public opinion poll conducted from May 12 through May 19, 2017.

The overall sample revealed that the majority of Americans do not support the President’s decision, while 34 percent of voters approve and 8 percent are undecided.  When further broken down by age groups, the poll found that 59 percent of voters aged 18-35 disapprove of firing FBI Director James Comey, 31 percent approve and 10 percent are unsure. Which is consistent among voters aged 36-80, who disapprove by 55 percent, with 37 percent approval and 8 percent unsure. Conducted entirely via SMS text message, the Hornstein poll is a departure from the more traditional polling methods utilized by other organizations.

"This poll is based on an operating process that is targeting voters entirely through mobile devices, enabling us to procure responses in a highly efficient manner,” stated LIU Political Science Professor Stanley B. Klein.  “In this poll, the respondents reflected their resolute disagreement with President Donald Trump to remove FBI Director James Comey. "

It was announced on May 9th, that FBI Director James Comey had been fired by President Donald Trump which attained national media coverage, and explains the salience of this nationwide survey.

“LIU has a deep interest in understanding how politics, policy and public opinion influence job markets, industry growth and career prospects for our students,” said Dr. Kimberly R. Cline, President of Long Island University.  “The Hornstein Center for Policy, Polling and Analysis allows us to continue honing that knowledge to cultivate programs and engaged learning activates that give our students an edge when pursuing employers.”

This Long Island University Steven S. Hornstein Center for Policy, Polling & Analysis statistical poll was conducted May 12th to May 19th, 2017 entirely by SMS text messages conducted in English to 1465 registered voters aged 18-80. Polling data was sorted by age, political affiliation, gender & geographic location in efforts to ensure a nationwide representative sample. This poll has an overall margin of error of +/- 2.5 points. The Steven S. Hornstein Center for Policy, Polling & Analysis is an independent and fully nonpartisan institute directed by Dr. Stanley B. Klein which endeavors to conduct research on a variety of issues affecting the American electorate. Dr. Klein has taught political science for over 50 years at LIU-Post bringing extensive experience in politics, government, and academia to the work done here at the Steven S. Hornstein Center."  For more information, contact andrew.batcheller@liu.edu.