LIU Hornstein Center Poll Shows Overwhelming Support for Infrastructure Investment, Disagreement on How to Pay for It 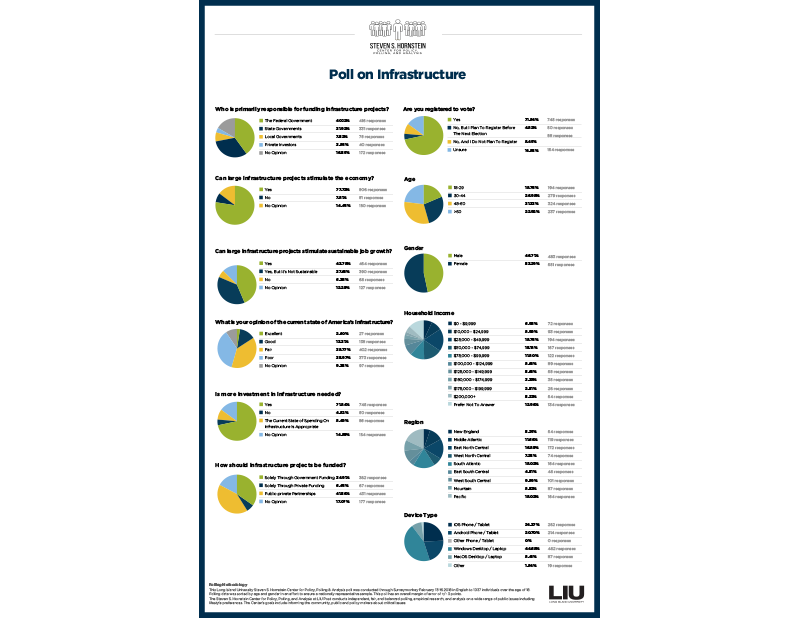 Brookville, NY (February 16, 2018) – A new Long Island University Hornstein Center for Policy, Polling and Analysis poll shows that Americans overwhelmingly support a greater investment in infrastructure and believe that infrastructure spending stimulates the economy.  However, Americans are far more mixed on which level of government is primarily responsible for infrastructure and the role of public-private partnerships.

“The American people are saying loudly and clearly they want their elected leaders to spend more on infrastructure,” said Dr. Edward Summers, Fellow at the Hornstein Center.  “They are not wedded to how that spending is done, and see a role at all levels of government as well as the private sector.”

As Congress prepares to debate infrastructure and the Trump Administration’s proposal which calls for almost all of the proposed $1.5 Trillion investment to be funded by state and local government, there are stark differences on where Americans see the responsibility to fund infrastructure.

“Americans support government infrastructure spending and generally prefer a role for the private sector,” said Dr. Edward Summers, Fellow at the Hornstein Center.  “As lawmakers debate this issue, there is clearly room for agreement. ”

The findings are based on a published public opinion poll conducted from February 14-15, 2018 of 1037 Americans.