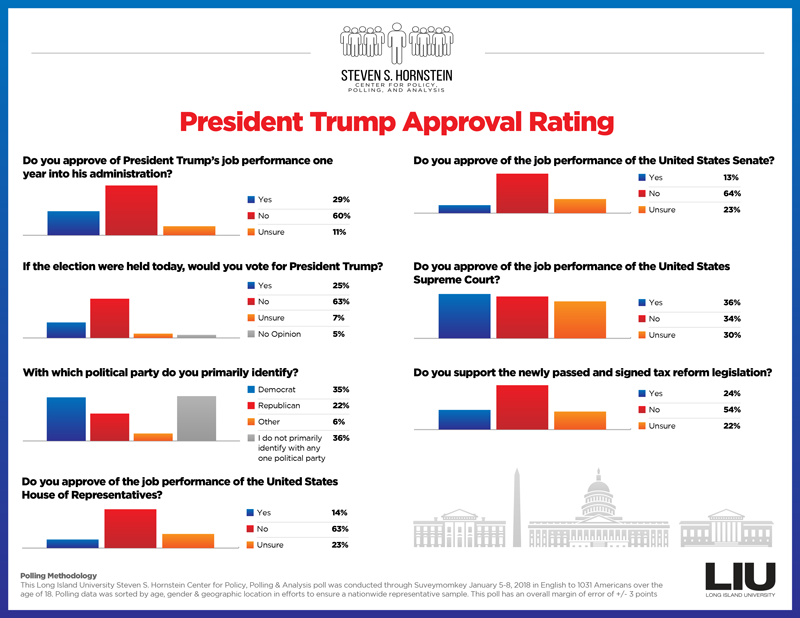 Brookville, NY (January 10, 2018) – A new Long Island University Hornstein Center for Policy, Polling and Analysis poll showed widespread disapproval of the Executive and Legislative branches. The poll showed that the majority of Americans disapprove of the President (60 percent), the Senate (64 percent), and the House of Representatives (62 percent) current job performance. Views on the Supreme Court’s job performance was more evenly split, with 35 percent approval, 34 percent disapproval, and 30 percent unsure.

The national poll showed a correlation suggesting continued loyalty to the President amongst approximately a quarter of the American public. In three different questions, 25 percent answered that they would vote for him if the election was today, 23 percent said that they approve of the newly passed and signed tax legislation, and 22 percent responded that they primarily identify with the Republican political party. These numbers show that while Trump’s Republican base of support has dwindled since his election night, there is a fiercely loyal group that are unlikely to be swayed by current news cycles or popular opinion.

“There is no question that President Trump has a strong hold on his base – but there is an even stronger group of Americans who find themselves turned off by his non-traditional leadership style,” said Dr. Edward Summers, Fellow at the Hornstein Center.  “The President’s party is hoping that policy wins will re-engage that group and expand his base, but if the 53 percent disapproval of the new tax legislation is any indication, they are going to be fighting an uphill battle during the 2018 midterms.”

The findings are based on a published public opinion poll conducted from January 5-8, 2018 of 1031 Americans.


Do you approve of President Trump’s job performance one year into his administration?

If the election were held today, would you vote for President Trump?

With which political party do you primarily identify?

I do not primarily identify with any one political party:  36%

Do you approve of the job performance of the United States House of Representatives?

Do you approve of the job performance of the United States Senate?

Do you approve of the job performance of the United States Supreme Court?

Do you support the newly passed and signed tax reform legislation?

This Long Island University Steven S. Hornstein Center for Policy, Polling & Analysis poll was conducted through Suveymomkey January 5-8, 2018 in English to 1031 Americans over the age of 18. Polling data was sorted by age, gender & geographic location in efforts to ensure a nationwide representative sample. This poll has an overall margin of error of +/- 3 points.