A camp for all ages and abilities. Partnering with local sports organizations to create a universal basketball camp for all! Work on your skills through close training sessions and have some fun with team based drills! Participants will be split into age groups and work closely with our players and coaches.

Campers will enjoy a fun team environment. Each activity & game will demonstrate a breakdown of positions.

Camp Outcome:
Provide all grade levels with a fun & competitive environment that leaves them wanting to amerce themselves with Shark culture. Each athlete will receive an amazing experience & grow in the process. 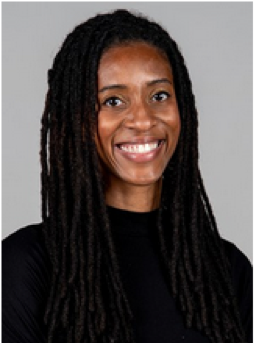 Haynes came to the Sharks in 2019 and has since made a major impact in the Northeast Conference. Coach Haynes coached the Sharks to 14 Double-Doubles and four tallied 10 or more games in double-digits scoring. After record setting inaugural season, the Sharks fought through an adversity driven season due to COVID-19. They finished with seven wins on the season and rallied to a four-game winning streak to close the season. Coach Haynes logged her first 1,000-point scorer in junior Brandy Thomas.

A Columbus, Ohio, native, Haynes attended The Wellington School for high school. Haynes tallied 2,222 points and 430 steals in her high school career. She currently holds a bachelor in political science from Michigan State University and a master's in sport management from Western Michigan University. During her time at Michigan State, she made the Big Ten All-Freshman team (2004). Under Coach P in 2005, her team was Big Ten Champions, Big Ten Tournament Champions and advanced to the NCAA Final Four. She was Big Ten Honorable mention in 2005 and in 2006 as the Spartans went to the NCAA Sweet Sixteen. As a captain, she was a member of the winningest senior class in school history with 103 victories.

Haynes is a 2017 inductee into the Greater Columbus Basketball Legends Hall of Fame.